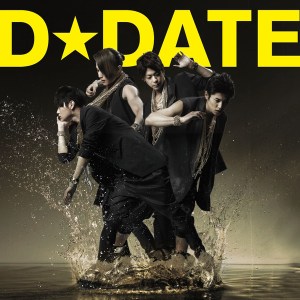 D☆DATE is a musical group that includes a couple of Kamen Riders, an Ultraman, and a tennis player. Or at least, that’s what they play on the big and small screens.

With the exception of the newest member, Yanagishita Tomo, the other members of D☆DATE, Koji Seto, Hirofumi Araki, Shunji Igarashi, and Arata Horii, are best known as actors in popular Japanese dramas. As with any entertainment industry in the world, if the talent is a triple threat, the more popularity and success they are more likely to attain.

This singing and dancing group was formed in 2010 by Watanabe Entertainment in celebration of the company’s 10 year anniversary. After two years, their first full length album entitled 1st DATE, was released in April 2012.

Fans of the boy band are most likely already familiar with majority of the 14 tracks on the album, as it includes all 5 prior singles plus the B-sides.

1st Date has a balanced mix of songs for a J-Pop group, from the mandatory happy-go-lucky summer track, “Day by Day” to a ballad that brings a winter atmosphere, “Zutto.” Songs like “All for One” and “Ato 1cm no Mirai” are fitting for a drama opening or ending theme.

And then there are the highlights of their debut album — the dance tracks. D☆DATE’s dance tracks aren’t groundbreaking or new. They remind me of standard K-Pop, but with an undeniable J-Pop flair to them. The first track, “Joker,” for example, starts off with heavy electronic beats, then the chorus hits and the electro beats are lessened a bit, revealing a lighter melody and tone to the song.

Next is my favorite song on the album, “Catch a Train!,” the opening theme for the drama DXTOWN. It has a small rap part, which is not unheard of in J-Pop. What sets this song apart from the rest of the album is the tune’s retro feel. It is simply refreshing.

Third track, “Love Heaven,” starts off soft with a piano. The speed then picks up with guitar riffs, which continue throughout the song. About two-thirds into it, there is a short dubstep breakdown. Some pop songs nowadays contain dubstep to be trendy, but many are over doing it causing the music to suffer a bit. In “Love Heaven,” there is just enough of dubstep to compliment the song, a welcoming aspect to my ears.

D☆DATE’s first album is a nice addition to any casual J-Pop lover’s CD Tower or IPod. Of course, it’s a must for a D☆DATE fan! While all the members’ vocals aren’t strong, they aren’t terribly weak, either. The tracks are listenable and fun.