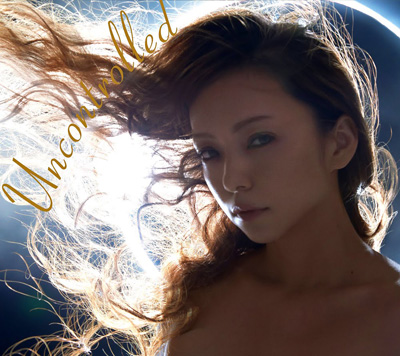 Opening with “In the Spotlight (TOKYO)”, Amuro asserts her dance-floor dominance. One of 5 English tracks on the album, its classy and simple structure presents a primer for Uncontrolled. Amuro doesn’t have to re-invent herself here. After 20 years, her quality vocals and high-style image are a brand all unto themselves.

“Fight Together” (One Piece OP), “Break It,” and “Naked” (feat lyrical help from m-flo’s VERBAL) keep the album’s energy in the red zone, and the sexy, tongue-in-cheek”Sit! Stay! Wait! Down!”, back-to-back with the superb dance track “HOT GIRLS” create a mid-album girl-power rally.

“Get Myself Back” and “Love Story” are great ballads, featuring flawless and sincere vocals, just as memorable as some of the greats on Best Fiction. “Tempest” has lullaby-like melody and grand-scale composition that should translate into a great moment in concert.

The album’s one disappointing move is the re-recording (re-English-ing) of the double-A-single “GO ROUND / OH YEAH.” Both songs contained a beautiful blend of English/Japanese in their original release a few months prior, but on the “album version,” they’ve gone full-English, and it’s a step backwards. Amuro’s delivery is solid enough to keep it together, but the re-worked lyrics bring the song down to junior-high level. I strongly recommend switching these out with the original versions.

The soft, seductive vocals and slick production of “Only You” make it a standout among the album’s new tracks. Even though Uncontrolled is packed with previously-released singles, this album is a great collection that you’ll easily replay again and again.