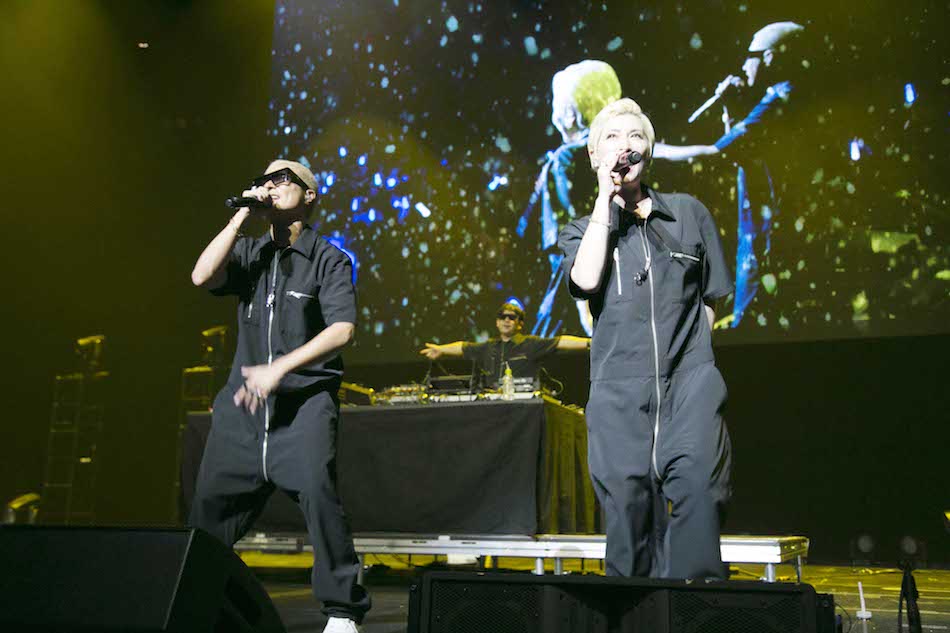 Six hours of dance music can be kind of intense for some people if you’re not used to it. While I’m not accustomed to starting an EDM marathon at 4 p.m., the concert’s early start time at the Microsoft Theater was a welcome relief from the 87-plus degree Fahrenheit weather outside. The line-up of Anime Expo’s m-flo presents “OTAQUEST LIVE” powered by LDH USA — featuring m-flo, YASUTAKA NAKATA, Crystal Kay, PKCZ, TeddyLoid, YUC’e, Hachioji P, and Masayoshi Iimori — truly spoiled us. Here are the highlights of each act! 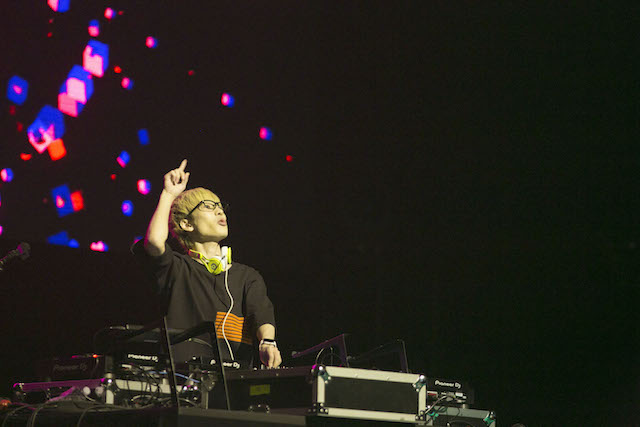 Hachioji P opened the night with an enthusiastic crowd waving their glowsticks and cheering to vocaloid songs. His diverse set had a mix of genres from pop to indie rock, and included familiar songs like Babymetal’s “Karate” and “Blue Star feat. Hatsune Miku”. 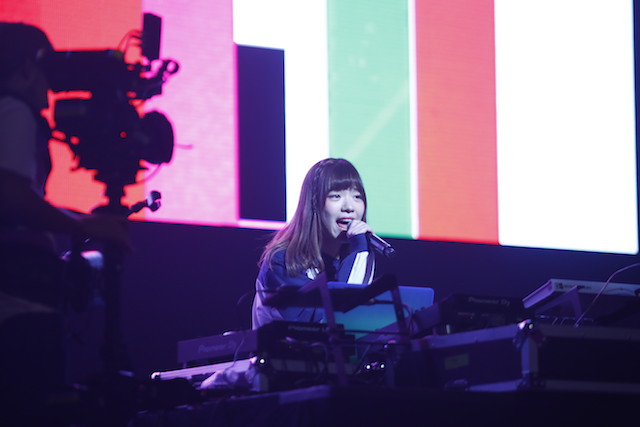 YUC’e was a pleasant surprise. She’s kind of like a cute, casual idol with a flair for pop and hip-hop. The highlight of her set was “Cinnamon Symphony”, a song that started off baroque then turned into dubstep. She made the song work so naturally, combining two worlds I haven’t heard together — such is YUC’e’s charm. Her presence and set fluidly resonated with the crowd, providing one of the best audience interactions of the night. 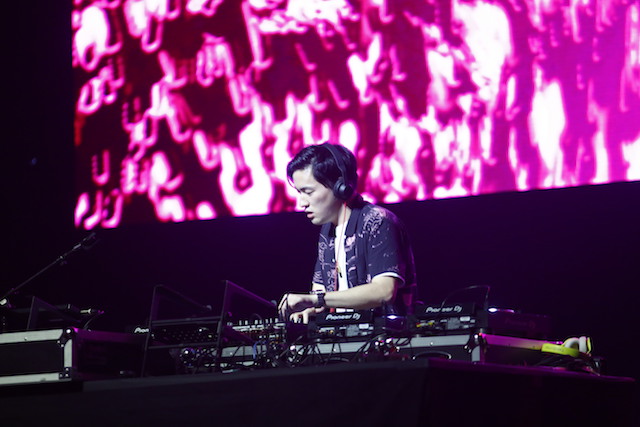 Masayoshi Iimori made me wish I was clubbing in Shibuya, but the audience and I settled for aggressively bopping our heads at our seats. His DJ set matched the kaleidoscope visuals on screen: strong geometric patterns and lines racing in and out, pulsating and strobing. His blue shirt with web print was a visual metaphor for his set which featured samples of Post Malone’s “Graduation”, Utada Hikaru’s “Simple and Clean” (to audience’s elated cheers!), and a bit of Bollywood. He appropriately ended his time at OTAQUEST with a remix of m-flo. 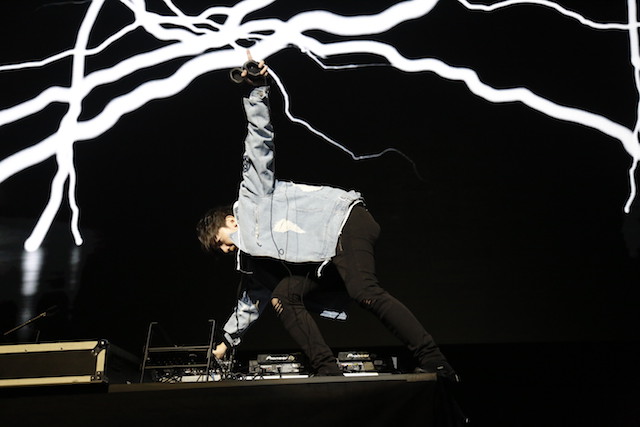 TeddyLoid had the crowd in the palm of his hand, attesting to the following he’s built through consistently touring the American anime convention scene. While I could picture his set fitting in with a European dance festival, we were at an anime con, and his cult hit featuring Daoko, “ME!ME!ME!” (which is not-safe, not-safe, not-safe for work!) with its hentai imagery was best understood in this environment — I wish I was warned. Many in the crowd were familiar with the song and video and clearly enjoyed it, as two live dancers dressed as the girl in the video performed beside him. 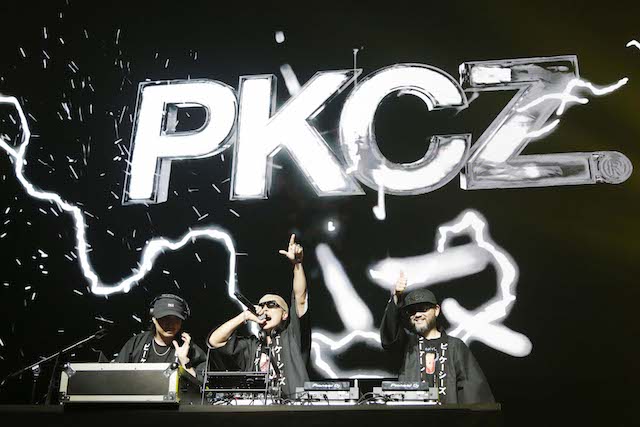 PKCZ®, formed by EXILE HIRO, DJ MAKIDAI, VERBAL (m-flo) and DJ DARUMA, made their U.S. debut at OTAQUEST full of hype and lots (and lots) of air horn. Represented on stage by VERBAL (m-flo), DJ MAKIDAI, and DJ DARUMA, PKCZ® is said to represent the new charm of Tokyo with the concept of celebrating the world by mixing it. The group mixed in old and new school hip hop, and also sprinkled in familiar crowd-favorites like the Final Fantasy theme. The recently released “BOW DOWN” featuring Snoop Dogg, Yultron and Crazy Boy got Microsoft Theater lit. 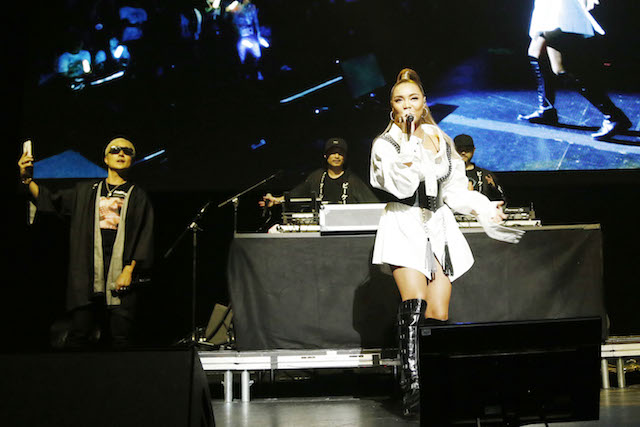 R&B songstress Crystal Kay shared her first song of the night “Hard to Say” from 2002 with PKCZ®, then followed it up with her new song “Summer Fever”. She could only fit in four songs due to being allotted only 20 minutes, a shame considering she is a queen and this was her first time performing in L.A.! “You know I only had a little bit of time so I was thinking, ‘What song should I sing?’” Kay said in her MC. “I was asking you guys what I should sing. And I know that it’s OTAQUEST, anime…if you know it, I want you guys to sing along.” Only a couple notes into the FULLMETAL ALCHEMIST ending theme “Motherland”, people erupted into cheers. Her set was quickly coming to an end as she thanked m-flo, VERBAL, and PKCZ, saying, “…they’re like my family!” “Hard to Say” was produced by Taku (m-flo) and her first collaboration was with VERBAL on “Ex-Boyfriend”. “It’s so crazy how after all these years we’re still on the same stage like this,” Kay said. The short and sweet set ended with “Boyfriend Part II”. 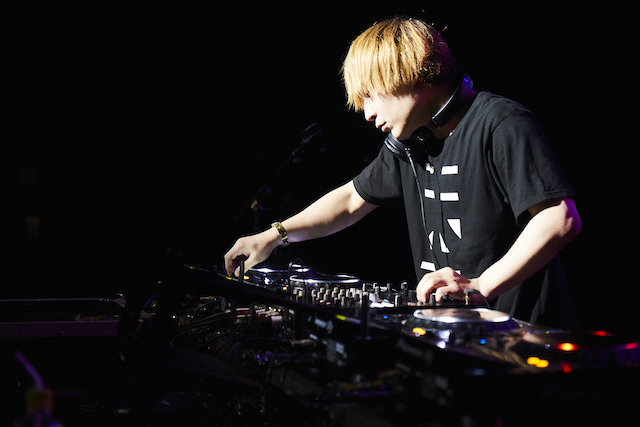 Kyary Pamyu Pamyu and Perfume cuts dominated Yasutaka Nakata’s set, and rightly so, given these are the two most successful and well-known acts he’s produced — what would these charismatic and fashionable acts be without his music? He opened up his set with Kyary Pamyu Pamyu’s “Fashion Monster”, and included her other iconic hits like “PONPONPON”, an awesome remix of “CANDY CANDY”, and “Ninja Re Bang Bang” that showed a robotic mouse doing Kyary’s dance on screen. Perfume’s worked with the producer since 2003, so I got a bit nostalgic and full of feels seeing the man who’s responsible for their soundscape playing “Secret Secret” (2004), “Cosmic Explorer” (2016), “If You Wanna” (2017), and witnessing his clever use of ringtones in a delightful remix of “Tokyo Girl”. Nakata not only produces for others, but creates his own music as one half of the group Capsule. Surprisingly, he just released his first solo album this February titled Digital Native, from which he played “Level Up” (featuring Street Fighter on the screen), Ultra Music Festival anthem “Love Don’t Lie”, and the single “White Cube”. We even got to hear his remix of Zedd and Alessia Cara’s “Stay”. This was only his first appearance in the U.S, I can’t imagine what his sets are like in Japan! 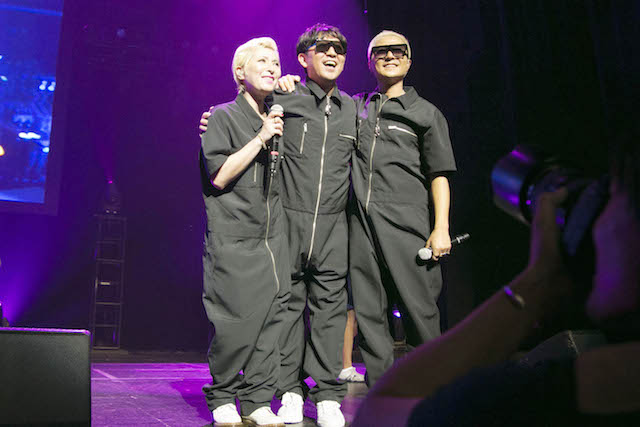 m-flo’s historic first U.S. performance at OTAQUEST was full of surprises! Their set started off with just DJ Taku Takahashi and MC VERBAL performing songs like “Get on!”, “dwm”, and “SHE’S SO (OUTTA CONTROL)”. The first surprise came when Crystal Kay re-appeared to join them on stage for “Reeewind!”, a song originally released in 2003. The second surprise was when their original member LISA, who just re-joined the group earlier this year, joined them on this stage – it was now truly and completely m-flo’s first time together in the U.S. The audience shrieked in delight and stood up to capture the moment on their cell phones. All three musicians truly shined together, the chemistry and vibe overflowing. LISA’s unique singing and ability to flawlessly transition to rap in “Been So Long” stood out as one of my favorite performances from her that night. Of course, they performed “No question”, the first comeback single from all three members released last February, then later ended the concert with “come again”. A new chapter in m-flo’s journey and we got to be a part of it!